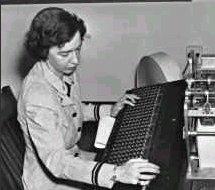 Grace Murray Hopper was a remarkable woman and a leader in the field of software development. She contributed (0. example)    to    the transition from primitive programming techniques to the use of sophisticated computer languages.

LANGUAGE AWARENESS TASK 2  – In the following sentences one of the words is an extra word. Find it and

write it in the box.

LANGUAGE AWARENESS TASK 3  - Sentence transformation. Complete the second sentence so that it has

the same meaning as the first. Do NOT use more than three words. Write only the missing words in the boxes.

Look at the examples:

›     How about going to the cinema next Saturday?

45. There is too much noise in discos.

I will put on more weight unless I on a diet.

47. Why don’t you give them a hand with their luggage?

If I were you, I give them a hand with their luggage.

It’s been years I saw my uncle.

49. There are only a few tickets left for the concert.

There aren’t tickets left for the concert.

50. This bedroom is too small for three people.

This bedroom isn’t   for three people.

My colleagues found the presentation .