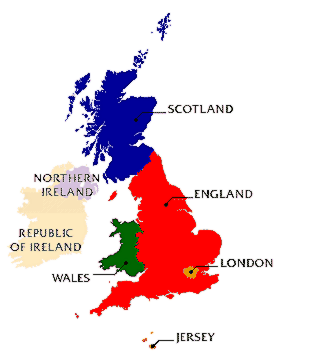 If you look at a map of Europe, you see two large islands to the north-west of France. These two islands, and the smaller ones round them, are called the British Isles. The larger of the two is called Great Britain; the smaller one, to the west, is Ireland. Between them is the Isle of Man.

There are three countries in Great Britain: Scotland in the north, England in the South, and Wales in the West. Edinburgh is the capital of Scotland; and the people are Scots. The people living in Wales are Welsh and their capital is Cardiff. The capital of England, London, is also the capital of the whole United Kingdom. Ireland has two parts: in the south, there is the Irish Republic, or Eire, with its capital Dublin. The north of Ireland is part of the United Kingdom, but Northern Ireland, or Ulster, has its own capital, Belfast. People in both islands speak English, but some Irish speak the Irish language, some Scots speak Gaelic and many Welshmen speak welsh.

Although the British Isles are no bigger than Italy, there is a great variety of scenery. The north of Scotland and parts of Wales have beautiful mountains and valleys; the south of England has rich farmlands and even palm-trees in the south-west. People love walking on the hills or camping by the lakes, and they do not have to travel very far if they want to see the countryside or the sea.

The British often complain about the weather, but it is rarely extremely hot like the Sahara, nor extremely cold like central Russia. It is an excellent climate for agriculture, but not always good for holidays.

Activity One: Skim throuhg the text then answer these question.

Activity Three: Match the words and their meaning.

Activity Four: Arethe following sentences true, false or not mentioned in the text.

1.áááá Ireland is larger than Britain.

3.áááá Cardiff is the capital of Scotland.

4.áááá The United Kingdom is in the south of Ireland.

5.áááá There are rich farmers in England.

6.áááá There are beautiful mountains in Scotland.

7.áááá The British never complain about the weather.

8.áááá The British climate is not always good for holidays.

Activity Five: Answer the following questions according to the text.

1.áááá Name the islands described in the passage.