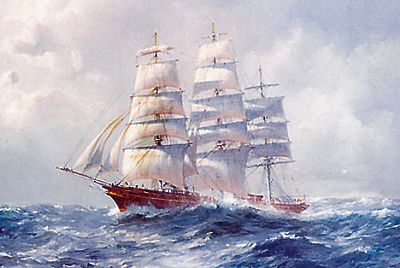 Read the article and do comprehension exercises 1 and 2. Then put the verbs in brackets in the correct passive form.
Fire devastates Cutty Sark
The Cutty Sark ship, one of London's most popular tourist attractions,  (devastate) by a fire, which police think may  (start) on purpose.
More than 40 fire fighters   (call) to the 138-year-old tea clipper ship in Greenwich early on Monday morning.
The ship  recently  (close) to visitors so improvements costing Ł25 million could  (carry) out.
A spokesman for the London fire service said the whole ship  (affect) by the massive fire but nobody  (hurt).
Police don't know what caused the fire yet, but said they were treating it as suspicious. That means the fire may  (start) on purpose rather than by accident.
Chris Livett, from the group which looks after the ship, said the fire was a significant setback but they were determined to put the ship back together again.
He said the decks could not  (save) but the damage didn't appear as bad as first feared.
Half the planking, as well as all the old artefacts on board, escaped damage as they  (remove) while the refurbishment work was under way.
He added: "She's been through storms and hurricanes. She's been battling all her life. She's not dead yet, far from it."
The Cutty Sark  (use) to carry tea around the world in the 19th century. It now sits at a dry dock at Greenwich as a living museum.

Exercise1. Find words or phrases in the text which have a similar meaning to the following.

Exercise 2. Are the following statements true or false? Write T for True or F for False.

A.  Why is the ship called Cutty Sark? Read the following story to find out. Then fill in the gaps using the following words.
There is an old Scottish legend that was later turned into a story by Robert Burns. This story is about a farmer called Tam O'Shanter.
It was very late on a dark and  night when Tam, who had been to Market to sell his wares and had called at the local inn afterwards for a few drinks, began his journey home. Tam was riding his old mare Meg down a lonely road, when he drew close to the church at Kirk Alloway.
Through the cold night air he heard a strange and  sound, and as he looked into the night sky he saw the glare of fire!
There, in the churchyard, dancing around a huge  was a coven of witches and warlocks. Tam sat on his horse, rigid with terror! The witches danced on and Tam noticed that one of the hags was younger and more  than the others. Her name was Nannie, but Tam didn't know this; all she was wearing was a short petticoat so he called her 'cutty sark', which is an old regional Scottish name for this .
Well, the dancing became wilder and wilder and Tam became more and more engrossed. At last, he could bear the  no longer and he shouted out,
"Weel done 'cutty sark'!"
With a flash the bonfire went out, and a soul-tearing  went up from the witches and warlocks, as they began to  towards Tam, desperate to get to this mortal who had ruined their revelry.
Poor Tam. He was in fear of his life, and for a moment just sat there, but after a few seconds that seemed like lifetimes, he managed to spur Meg on, in a desperate race to save his life.
Now, witches cannot cross running water, and fortunately for Tam, the river Doon was nearby. He set Meg galloping  towards the bridge, with the witches in hot pursuit.
Nannie, being younger and faster than the rest, was the closest to him, and was reaching out to grab Meg’s , just as the mare reached the bridge.
Luckily for Tam (although not so for Meg), the horse's tail came away in Nannie's hand just as the mare  over the bridge. Tam was saved! The witches and warlocks stood on the river-bank cursing and screaming at Tam who had had a very  escape.
This was the story that inspired the naming of Cutty Sark. Although we do not know why the name was chosen, Jock Willis (the owner of the ship) was a well-read man who enjoyed poetry. During his time as a ship's captain, he would read French novels in his cabin. He also named one of his other ships the Hallowe'en, the title of another Burns poem. Although "cutty sark" was a little unusual, it certainly suits a sleek, swift tea clipper, giving her an air of magic and mystery.

B.   Now look at the words in bold. Can you guess their meaning from the context? Look for key words that can help you to guess. Finally match the words in bold with their definitions.
wild noisy dancing, eating, drinking etc, usually to celebrate something
2
a piece of underwear for a woman or girl which is like a dress or skirt
3
a group or meeting of witches
4
following someone closely, trying hard to catch them
5
an adult female horse
6
an ugly old woman
7
saying magic words which are intended to bring bad luck to someone
8
small products for selling, in a market or on the street but not usually in a shop
9
a bright unpleasant light which hurts your eyes
10
a man who has magical powers, especially evil powers
11
so interested or involved in something that you think about nothing else
The End
The first text was taken from http://news.bbc.co.uk/cbbcnews/hi/newsid_6670000/newsid_6675400/6675483.stm
The second text was taken from http://www.cuttysark.org.uk/index.cfm?fa=contentGeneric.fdvmyqknhxemnmvz&pageId=210
The dividers were taken from http://www.graphics-4free.com/dividers.html